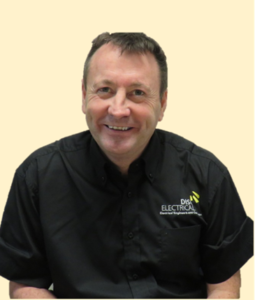 Ian is Director and Company Secretary of DISC Electrical Limited.  He has over 30 years’ electrical contracting experience and co-founded the business alongside Danny Kinsella. Ian also successfully completed an apprenticeship with MANWEB and rose through the ranks to Contracts Manager at MANWEB/Scottish Power based in Warrington.  He was responsible for managing high value contracts until moving company in 1999 where he continued in a similar role.  Ian combines his project design skills with his estimating knowledge to project manage many large schemes with DISC. He also manages DISC’s accreditations and is a qualifying Supervisor for NICEIC.